This issue went on sale on time. This issue is labeled as a Countdown Tie-in. 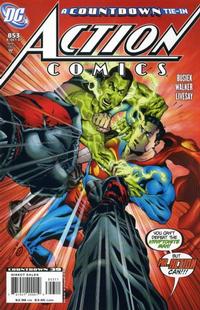 Genre
superhero
Characters
Superman; Jimmy Olsen; Kryptonite Man [Dr. K. Russell Abernathy]; K-Monkey; Exomorphic Man (cameo); Robin [Tim Drake] (cameo); Wonder Woman (cameo); Lois Lane; Gina (cameo); Gordan (cameo); Perry White (cameo); Dr. Cyber (cameo); Atomic Skull (cameo); Tobias Whale (cameo); Calculator (cameo); Krypto (cameo); The Ünternet (intro)
Synopsis
The lab monkey from the tests that created the Kryptonite Man is on the loose, and finds the Kryptonite Man, helping him escape. Jimmy has become a hero, Mr. Action, and debates what to do next. Kryptonite Man takes over Rydertech's labs. Jimmy finds out about it, and as Mr. Action attacks, but is defeated. Superman tracks them down, but is overcome also. As he is tied up in the back, Jimmy doesn't know that Superman's there, and constructs another hypersonic signal device. The signal is answered by Krypto.
Reprints
Keywords
Signal Watch

Story continued from the previous issue and from Countdown (DC, 2007 series) #39, and continues in the next issue. The monkey (which appears to be really an ape) is unnamed, but in a Q&A session on Superman Homepage Kurt says that he calls him K-Monkey.