This 3-D version of this issue is generally identical to the normal issue; the only differences are the 3-D effects on the cover and story, the 3-D goggles inserted, and the price. Also, on the cover a phantom zone villain on the upper right is over the logo on the normal cover, but behind it on this cover. This issue was one week late from the original shipping date of this issue and went on sale 2007-07-05 in the US. The contents of this issue had originally been solicited first for issue #847, then for issue #848, and then finally for this issue; DC announced the change in a press release dated 2007-02-13. 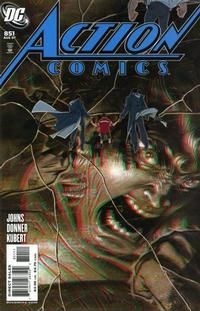 Genre
superhero
Characters
Superman; Mon-El; General Zod; Ursa; Chris Kent [Lor-Zod]; Dev-Em (intro); Lois Lane; Lex Luthor; Supergirl [Kara Zor-El] (cameo); Green Lantern [Hal Jordan] (cameo); Wonder Woman (cameo); Power Girl (cameo); Green Lantern [Alan Scott] (cameo); Batman (cameo); Superman Revenge Squad [Bizarro; Metallo; Parasite] (intro, cameo); Phantom Zone; Fort Rozz (intro)
Synopsis
Superman's trying to adjust to being in the Phantom Zone, and sees the events back on Earth. Zod, Ursa, and Non have Chris, and Supergirl and the Justice League are fighting the Kryptonians. Mon-El (a friend Superman projected into the zone years ago to save him from lead poisoning) appears, and helps Superman adjust to the zone. Mon-El describes how it started, with Zod finding Fort Rozz, a prison that had been accidentally transported in when a projector exploded during a riot started by Dev-Em. As the circumstances were unusual, the fort is actually solid, and people can be normal inside of it, and time passes. That's how Zod and Ursa had their son Lor-Zod (Chris), but they abused him. Superman goes into the fort, confronts Dev-Em, and is about to be knifed, but Mon-El joins and rescues him. But Mon-El is affected by the lead poisoning again, so Superman has to push him back into the regular zone. Superman finds another ship, and launches it, leaving the zone and returning to Earth. He arrives to find a destroyed Metropolis, with Kryptonian crystals growing in one area. The defeated heroes are being brought there, and Ursa wants to kill Lois, but Zod wants to find out why Superman "settled" for her. However, Lor-Zod attacks Zod with his heat vision to stop him, as that's what Superman would do. Zod then says he needs to remind Lor-Zod of who is father is. Superman knows he can't confront the criminals directly, so he finds Luthor, and "asks" to borrow his anti-Kryptonian weapons. Luthor laughs, and has Parasite, Bizarro, and Metallo attack Superman.
Reprints

Story continued from issue #846 and continues in Action Comics Annual (1987 series) #11. The Kryptonese text on the button on page 12 is translated as: "LAUNCH".

"Safety goggles" (3-D glasses). Labeled both in English and Kryptonese, and includes a photo of associate editor Nachie Castro dressed as a phantom zone villain wearing the goggles (ID confirmed by Geoff in a post on his message board dated 2007-11-10).