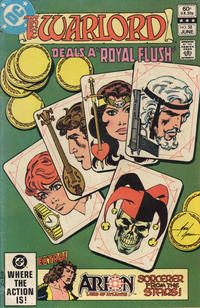 Scripting credits per Mike Grell October 2006. "I worked by dictation and she typed the scripts. I plotted, she wrote. I got billing credit."

The real Travis Morgan does not appear in this issue, only his double.

Job Number
L-1026
First Line of Dialogue or Text
Dear All: I have been an avid fan of comics...