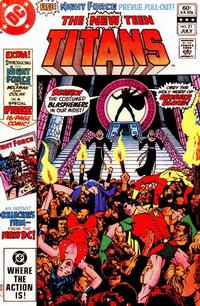 Beware the Wrath of... Brother Blood! (Table of Contents: 1)

1st appearance of the Monitor (voice only). Two-panel-sequence-cameo showing the outside of the Monitor's ship, and the inside with just his voice. This issue is cover-dated July 1982, with The Monitor character not fully shown until G.I. COMBAT #274 cover-dated Feb 1985, and the "CRISIS ON INFINITE EARTHS mini-series issue #1 cover-dated April 1985. 2nd appearance THE NEW TEEN TITANS ANNUAL #2, cover-dated Summer 1983.

Wendy Fletcher is the maiden name of Wendy Pini of WaRP Graphics and Elfquest fame.

The Night Force (Table of Contents: 2)