This issue has no letters page.

Beware the Blockbuster! (Table of Contents) 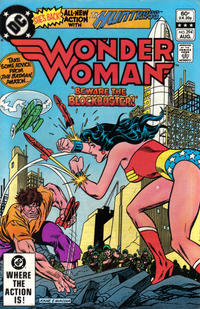 Steve, Etta, and General Darnell throw a surprise birthday party for Diana Prince, while Diana muses that her real birthday is usually spent on Paradise Island, and the date she gave to the Pentagon for Diana Prince is false.