Fox resumes publication of this title. 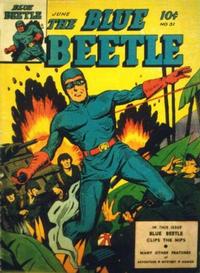 The Adventure of the Crumbling Skyscraper (Table of Contents: 1)

Genre
superhero
Characters
The Blue Beetle [Dan Garret]; Joan Mason; Admiral Mason (Joan's father)
Synopsis
German saboteurs blow up a building and leave evidence that the Beetle is responsible. But the Beetle uses his super powers to rebuild the entire building by morning. But the saboteurs continue their campaign to blacken the Beetle's name.
Keywords
Beetle Mobile; Beetlebird; black light

Beetle has super powers, including the ability to grow to giant size. He also has an airplane, the Beetle Mobile, the Beetlebird and a black light that turns him invisible.

Peril In the Pacific (Table of Contents: 4)

Genre
superhero
Characters
The Blue Beetle [Dan Garett]; Colonel Denton; Lt. Adams; Lt. Morrow; Gestapo agents (villains); the Japanese (villains)
Synopsis
Dan Garrett is given the assignment of protecting Colonel Denton who is delivering information of the utmost importance. But Gestapo agents infiltrate the plane Denton is flying on, and Dan and the Colonel end up stranded on a "Jap infested" island in the Pacific.

They Came to Destroy America (Table of Contents: 5)

The Whistling Death (Table of Contents: 6)

The Very Salty Tale of the O'Brine Twins (Table of Contents: 7)

Genre
adventure; humor
Characters
Waterman O'Brine; Wetmore O'Brine; Cap'n McArsenic
Synopsis
After being declared 4-F by the draft board, the O'Brine twins join the Merchant Marine. There they foil a submarine attack and volunteer to sale the captured submarine back to Washington. Only trouble is, they don't know the way!

Coxwell and Glaisher (Table of Contents: 9)