Washed Up (Table of Contents) 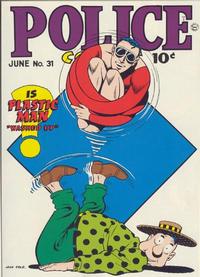 In previous issues, Pappy Drip is described as Dewey's grandfather (and Ma's father) but in this story he suddenly becomes Dewey's father and Ma's husband.

[The Trance-Call Fails] (Table of Contents: 4)

Blackmail and Blood (Table of Contents: 6)

Death at the Mike (Table of Contents: 7)

First Line of Dialogue or Text
The man stepped up to the bank of microphones and straightened his notes to...
Genre
detective-mystery
Characters
Allison Aylesworth; Eric Holmes; Arthur Jenkins; Dick Mace; Judge Reardon
Synopsis
Dick Mace is called in to examine the strange deaths of Aylesworth and Holmes.

Stand by for Action (Table of Contents: 8)

First Line of Dialogue or Text
Yes, Hustace, Mustapho was a famous stage magician and...
Genre
superhero
Characters
The Human Bomb [Roy Lincoln]; Hustace Throckmorton; Mustapho (villain, introduction, reforms)
Synopsis
A stage magician kidnaps Hustace, but the Human Bomb discovers that he is under external mental influences, so his prison sentence is commuted and he takes to charity work.

The writer credit for Gustavson have been replaced with ? (notes added by Craig Delich 2013-1-23, revised 2017-2-23). Jim Amash and Mike Kooiman, in the Quality Companion, verify that Gustavson wrote this feature through Police #22, then picked up again with #37. The intervening writer is unknown for this story.