Book has been listed elsewhere as both "Underwhere" and "Under Where." Cover logo and title in indicia list book as "UnderWhere." 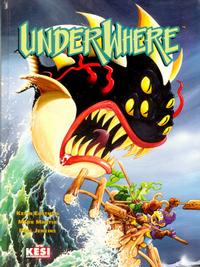 Genre
adventure; fantasy-supernatural
Synopsis
Jake and his mother must find his Grandfather's will or be evicted from the home he left them. While searching the house, Jake finds a treasure map left to him by his Grandfather which leads him to a special amulet. After putting it on he is taken to the tiny magical kingdom of UnderWhere. Here he finds himself thrust into an epic quest to save the kingdom from the evil Doc Static.

Original release is simply credited as by Kevin Eastman, Mark Martin, Paul Jenkins. Some pages of art are signed by both Kevin Eastman and Mark Martin, while others just signed by Martin. It is obvious that Mark Martin produced the final painted art, but beyond that no specifics are given. IDW paperback release from 2018 gives more detailed credits.