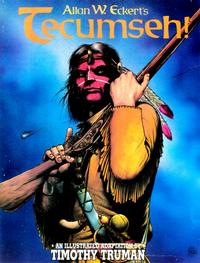 The inside front cover and inside back cover are blank.

Based on the play "Tecumseh!" by Alan W. Eckert, produced by The Scioto Society in Chillicothe, Ohio. Marion Waggoner, General Manager.

First Line of Dialogue or Text
While the burgeoning United States...

Back cover. Inaccurate summary of the story. Illustrated.