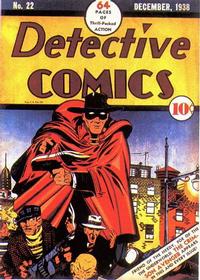 [The Return of Fui Onyui] (Table of Contents: 2)

A sign on the wall behind Slam in the splash panel reads:
DR. L. K. SIEGEL - DENTIST

[Mansion of Maniacs] (Table of Contents: 3)

[Wanted, Dead or Alive: The Crimson Avenger] (Table of Contents: 4)

A Sticky Clue (Table of Contents: 6)

Bob Showed Them How Spies Work! (Table of Contents: 7) (Expand) /

[Break-In at the Bartilian Embassy] (Table of Contents: 8)

First Line of Dialogue or Text
Did you call for me, Sarge?
Genre
humor; detective-mystery
Characters
Oscar the Gumshoe

[In Vino Philatelus] (Table of Contents: 15)

[The Duchess of Biltshire's Diamonds] (Table of Contents: 17)

Last appearance in Detective Comics. The feature makes one more appearance in Adventure Comics (DC, 1938 series) #38 (May 1939), where it replaces Cotton Carver for one issue. Story probably inspired by "The Duchess of Wiltshire's Diamonds" (1897) by Guy Booth. Synopsis and some other information by Art Lortie.

The Snow Murder (Table of Contents: 18)