On-sale date from Amazing Heroes #13.
This issue has variants:

The Thing Versus Machine Man (Table of Contents) 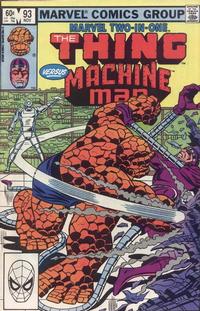 Look Like a Big League Player (Table of Contents: 1) (Expand) /

Sue Richards appears in the cameo flashback of last issue, but she did not appear last issue and a point was made that she was on a trip with Franklin at the time.