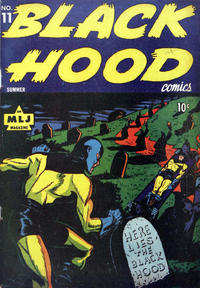 Tale of the Terrible Trunk (Table of Contents: 1)

Characters
Black Hood
Synopsis
Black Hood holds up a photograph and asks readers to solve a crime based on its contents. The answer is printed backwards and can be read in a mirror.

The Nobleman of Crime (Table of Contents: 3)

Originally credited to Weisbecker (Clem) on pencils and Gil Kane (Pen) on art. "Pen" is a pen name for Pen Shomaker according to Jerry Bails' Who's Who.

The Man with the Crooked Smile (Table of Contents: 5)

[Murder in the Blackout] (Table of Contents: 6)

First Line of Dialogue or Text
The wing is made of 3/32" balsa.
Synopsis
Plans and instructions to make a balsa-wood airplane model. A list of new members of the Junior Flying Corps is also included.

All art originally credited to Weisbecker, but Jerry Bails' Who's Who has PEN as the pen name of Pen Shumaker.