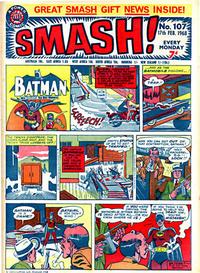 The Secret of Ka-Zar's Origin! (Table of Contents: 5)

First Line of Dialogue or Text
As the savage ape man approaches the sightless adventurer,
Genre
superhero
Characters
Daredevil [Matt Murdock]; GUESTS: Ka-Zar [Lord Kevin Plunder] (origin); Zabu; VILLAINS: Plunderer [Parnival Plunder] (origin); Maa-Gor
Synopsis
DD and Ka-Zar battle the Plunderer as the villain regales them with his origin and the origin of his savage brother. The Plunderer is after half of a necklace that his father gave the two brothers that will open a vault to a substance that destroys all weaponry. Everybody gets greedy and even the pirates and the butler vie for the halves of the medallion.
Reprints

Reformatted instalment of the original story.

First Line of Dialogue or Text
Coo! This snowman's given me a smashing idea for getting rid of my lolly so that I can inherit ol' Gran's million!
Genre
humour; children
Characters
Ronnie Rich; policeman; Fred; Crafty Charlie Chump (bank robbers)

Lolly is a British slang term for money.

First Line of Dialogue or Text
Do you think there's anything in these flying saucer rumours, Chief?
Genre
humour; spy
Characters
The man from B.U.N.G.L.E.; Chief; three witches

Part one of this story.

The Swots and The Blots / comic story / 2 pages (report information)

First Line of Dialogue or Text
Suffering sum-books! How did that hole get there?
Genre
humour; children

First Line of Dialogue or Text
Professor Kingsley has vanished while searching for a strange serpent which is terrorising a remote Welsh village.
Genre
adventure; science fiction; children
Characters
Brian Kingsley; Professor Kingsley; The Brain; the woman in white (villain)

Tricks and games for readers to play.

First Line of Dialogue or Text
In the balloon man's lair, it seems that Rubberman's incredible career is about to come to an even more incredible end......
Genre
adventure; superhero
Characters
Rubber Man; The Balloon Master
Synopsis
.