The Swots and The Blots / cover / 2 pages (report information)

First Line of Dialogue or Text
One of the Blots has nicked all the bingo balls at a holiday camp...
Genre
humour; children

First page in colour on cover, second page on inside front cover in black and white. 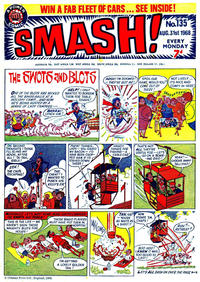 Final episode of this story.

Enter: The Leap-Frog! (Table of Contents: 5)

First Line of Dialogue or Text
Matt Murdock has a double problem! To quieten the suspicions of Karen and Foggy, he invents a twin brother,
Feature Logo

Daredevil, the Man Without Fear!
Genre
superhero
Characters
Daredevil [Matt Murdock]; Foggy Nelson; Karen Page; Mike Murdock [actually Matt Murdock] (introduction); Leap-Frog (villain, introduction)
Synopsis
In a moment of panic to protect his secret identity, Matt tells Foggy and Karen that DD is really his twin brother, Mike. So of course they want to meet him and they do. Oh, and Leap-Frog hops into town as well.

Instalment of the original story, reformatted.

First Line of Dialogue or Text
Larry the man from Bungle is in castle Eek that was reported to be haunted -
Genre
humour; spy
Characters
The Man From B.U.N.G.L.E. [Larry]; Grimly Fiendish; Squelch

The Man From B.U.N.G.L.E. is referred to as Larry in this story.

Art looks like the work of Mike Brown who drew in a Leo Baxendale style but could be Baxendale himself.

First Line of Dialogue or Text
Next time you get a drinking straw, save it for this super bit of Knowall trickery.
Characters
Mister Knowall

Tricks and games for readers to play.

Page includes adverts for stamp collecting sets and Subbuteo football games. (0.625 of letters and 0.375 of adverts).

First Line of Dialogue or Text
We can never get Charlie in the water - he's always watching that blooming telly of his!
Genre
humour; children
Characters
Charlie; Blackbeard

First Line of Dialogue or Text
The easy way off Koom's island is to make a radio transmitter from some of the components of all the electronic control equipment!
Genre
superhero
Characters
Batman [Bruce Wayne]; Robin [Dick Grayson]; Tyrone Koom; Alfred; Madame Zodiac; Pretty Boy Floy