The Executioner! (Table of Contents) 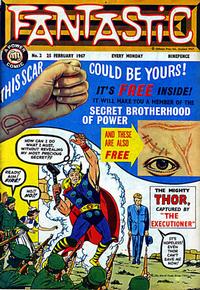 The Mighty Thor vs. The Executioner (Table of Contents: 1)

Genre
superhero
Characters
Thor [Doctor Donald Blake]; Jane Foster (introduction, called "Jane Nelson"); Comrade Executioner (death, not to be confused with the later Thor villain Executioner)
Synopsis
Dr. Blake joins a medical mission to a South American country wracked with civil war. The leader of the communist faction — the Executioner — orders an attack on the doctors, and Blake must use the power of Thor to save his colleagues and defeat the communists.
Reprints

A new text caption has been added to the final panel of this story to entice the reader to purchase next Saturday's issue.

Part two of the story reprinted from X-Men #1. The first part of page 1 of this reprint is a paste-up with a text recap. It includes an image of Magneto's face which is a modified version of panel 4, page 11 of the original story.

The Secret Brotherhood of - Shshh! (Table of Contents: 9)

Promo for this issue's free gift

In Next Week's Issue of Fantastic (Table of Contents: 10) (Expand) /

As in this example, Power Comics titles often spread Marvel reprint stories over two or more issues. Page one of this reprint includes a new text box which recaps the events of last issue.
The final panel of this story includes some new text to tempt the reader to purchase next week's issue.

The Mighty Thor (Table of Contents: 12)