The Vanisher! (Table of Contents) 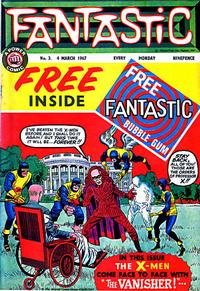 Genre
superhero
Characters
Thor [Doctor Donald Blake]; Loki (introduction); Jane Foster; Heimdall (introduction, cameo)
Synopsis
Loki escapes from his prison in Asgard and comes to Earth to get revenge on Thor. The trickster hypnotizes him to help make mischief, but Thor’s transformation into Donald Blake frees him from hypnosis, allowing him to defeat Loki and return him to Asgard.
Reprints

The original story was divided into two parts: an unmarked first part (5 pp) and part two- "The Vengeance of Loki!" (8 pp). In this reprint, the chapter heading for part two (on page six) has been removed and the panels on that page have been expanded top and bottom with minor detail added. This was common in these Power Comics reprints. Some 'hip' dialogue in a new text box in the story's final panel draws the reader's attention to the 'next issue' preview on the following page.

No One Can Stop The Vanisher! (Table of Contents: 4)

A newly-added caption in the final panel draws this segment to a close and points the way to the conclusion in next week's issue - "if the Vanisher doesn't vanish in the meantime!"

This is the story in which Iron Man changes the color of his armor from gray to gold in order to appear less menacing. Unfortunately, in this black and white reprint, he looks exactly the same after doing so! A new caption has been added to this segment's final panel, pointing the way to this story's conclusion in the next issue.

From Your Pal, Spider-Man (Table of Contents: 9)