[At Last: The Dreaded Magneto Returns to Face the X-Men] (Table of Contents) 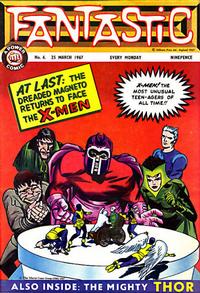 Prisoner In Chains (Table of Contents: 1)

Genre
superhero
Characters
Thor [Doctor Donald Blake]; Jane Foster; Colonel Edward Harrison (introduction); John Blandings (introduction)
Synopsis
In order to solve the mystery of a rash of defecting American scientists, Dr. Blake uses himself as bait and is abducted by communists. He is imprisoned with the other missing scientists, but is able to transform into Thor and free them all.
Reprints

The title reference to "Reds" was changed to "In Chains" by the UK editors who preferred to steer clear of any political commentary. One small text caption has been added to the story's final panel saying, "The end -- but only till next Saturday."

The Brotherhood of Evil Mutants [part 2] (Table of Contents: 5)

Genre
science fiction
Characters
Fenwick Flubbs
Synopsis
A lazy and incompetent reporter saves a stranger's life. When he's offered a flashlight as a reward he is offended and turns it down, so the stranger uses the light (a transporter) to return to Alpha Centauri.
Reprints

The original title word "Flashlight" was changed to the more familiar UK term "Torch" and altered throughout the strip.

Trapped By The Barbarian [part 2] (Table of Contents: 8)

Genre
superhero
Characters
Iron Man [Tony Stark]; the (Red) Barbarian; the Actor (dies in this story)
Synopsis
The Actor steals the plans to Tony Stark's latest invention and learns Iron Man's secret identity, but Iron Man regains the plans and tricks the communists into killing their own agent.
Reprints

Page 1 of this reprinted segment (i.e. page 8 of the original) has been altered. A title has been added along with some new text recapping the story so far. The panels have been rearranged and resized. Panel 6 has been omitted; The UK editors removed all references to "Red" and the implication of the Communist threat, hence The Red Barbarian is referred to, throughout the story as "The Barbarian"; A new text box at the end of the story tells us that Kala, - an evil queen whose beauty is matched only by her deadliness - is lined up for next week's issue. Readers are urged not to miss out!

A shock for Bully Brown - Cigarettes harm your health (Table of Contents: 9) (Expand) /