Kala, Queen of the Netherworld! (Table of Contents) 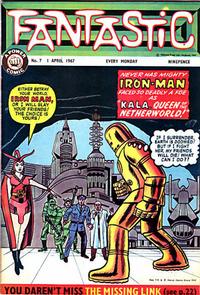 The Thunder-God and the Thug! (Table of Contents: 1)

Genre
superhero
Characters
Thor; Jane Foster; Thug Thatcher; Vince; Max; Ruby
Synopsis
A gangster, Thug Thatcher, is wounded in an escape and has his men kidnap Dr. Blake to operate on his gunshot wound. Following the successful surgery, Thug orders his hoods to "take care" of the doctor.
Reprints

A 'teaser' panel replaces the final 3 panels of page 6. This paves the way for the next segment of this two-parter and includes a picture of Thor taken from panel 1, page 7 of Journey Into Mystery #87 (December 1962)

Genre
superhero
Characters
Professor X; Angel; Beast; Cyclops; Marvel Girl; Iceman; John Grey; Elaine Grey; Mastermind; Magneto; Quicksilver; The Toad; Scarlet Witch
Synopsis
With Xavier's mental powers gone, the X-Men try to decide how they will function without his leadership. Trying to ferret out the X-Men, Magneto has the Toad enter an athletic event where he leaps to victory. With the crowd turning hostile due to the Toads amazing abilities, the X-Men arrive on the scene and capture him.
Reprints

The final panel of page 12 has been replaced by a text box designed to coax the reader into purchasing the next issue.

Kala, Queen of the Netherworld! (Table of Contents: 6)

Genre
superhero
Characters
Iron Man [Tony Stark]; Kala; General Baxu; Jim Evans
Synopsis
Stark is abducted by the queen of an underground kingdom to help her invade the surface. As Iron Man, Stark shows her that she would rapidly age on the surface, convincing her to call off the invasion.
Reprints

The Angel (Table of Contents: 8)