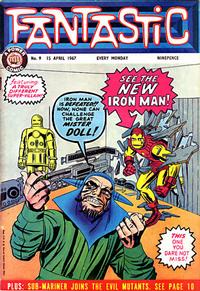 Trapped by the Carbon Copy Man! (Table of Contents: 1)

Genre
superhero
Characters
Thor [Don Blake]; Ugarth; Zano; Jane Foster; Odin; Mayor Harris
Synopsis
The heir to the throne of a race of shape-shifting aliens leads an attack on Earth as his rite of passage. The aliens replace officials in New York and disrupt the government, but Thor discovers their plan.
Reprints

Some new text appended to the final panel of this reprint puts forward the suggestion that the X-Men may have taken on a little too much by tackling Namor -- Prince of the Deep!

First Line of Dialogue or Text
Members Of The Jury Do You Find The Prisoner Guilty Or Not Guilty As Charged?
Genre
science fiction
Characters
Missing Link; Lita Munro; Dr. Viktor Kelso; Prof. Richard Allen
Synopsis
The Link goes on trial for wanton destruction. He is found guilty and jailed. He busts out of jail and then is rearrested and jail again. The delectable Lita Munro takes pity on him and brings him some reading material. After a week of study he can speak English! Meanwhile the evil Dr. Viktor Kelso flies to England where Prof. Richard Allen shows him his latest invention - a nerve paralyser!

The Missing Link continues its (literal) evolution into the Johnny Future strip.

A new caption at the story's conclusion indicates that Iron Man will need every ounce of his new strength when he roars into revengeful [sic] action against Mr. Doll next week!

The Miraculous Magneto! (Table of Contents: 12)