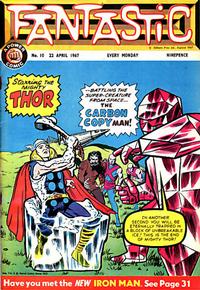 Trapped By The Carbon Copy Man! Part 2 (Table of Contents: 1)

A 'new' first page recaps events from part 1 of this story. This page combines some new text and a paste-up of reprinted panels from the original story - panel 6 of page 3; panels 1, 3 and 6 of page 6; panel 7 of page 7.

A new recap page is a paste-up of previously reprinted panels from the original story. These are: panel 4 of page 6; panel 2 of page 10 (slightly expanded to the left and the right); panel 6 of page 11.

First Line of Dialogue or Text
I Am Using Only A Fraction Of The Machine's Power, Kelso.
Genre
science fiction
Characters
The Missing Link; Professor Richard Allen; Professor Viktor Kelso
Synopsis
Evil Doctor Kelso tests his paralyser device on some animals. The Missing Link busts out of his cell again. A visiting newspaper reporter vows to write an account of the escape for tomorrow's front page!

The Changeling! (Table of Contents: 7)

Genre
fantasy-supernatural
Synopsis
An ugly king threatens a sorcerer with death unless he makes the king "the most handsome male" so the sorcerer turns him into a swan.
Reprints

Characters
John (a smoker); Graham (John's younger brother)
Synopsis
John and his younger brother, Graham, are rock climbing when Graham breaks a bone in his leg. John goes off for help, stopping on the way for a quick smoke. Later, John brings a mountain rescue team back to the scene of the incident. Graham has by now fainted. Graham rues the fact that, if he hadn't been winded as a result of his smoking habit, they would have got back to Graham sooner. John gives up smoking and is able to tackle more difficult climbs as a result of his improved fitness.

Genre
superhero
Characters
Iron Man; Mr. Doll; Pepper Potts; Happy Hogan
Synopsis
Iron Man has created a new suit of armor to help him battle Mr. Doll. Mr. Doll is defeated but, in the process, Tony has enraged Pepper by toying with her affections to create a diversion.
Reprints