The Blob (Table of Contents) 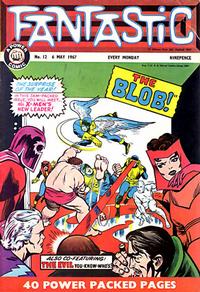 Sandu, Master Of The Supernatural! Part 2 (Table of Contents: 1)

Genre
superhero
Characters
Thor [Doctor Donald Blake]; Loki; Sandu (introduction); Jane Foster; Odin; Valkyries (introduction)
Synopsis
Loki has given a greedy carnival mystic magical powers in order to use him to attack Thor. Thor is overcome in their first battle, but with the help of Odin and his belt of strength he defeats Loki's pawn.
Reprints

Panels 1 and 3 of the first page of this reprinted segment (i.e. page 8 of the original) have been replaced by some text recapping the story so far.

Neil Wins The Chance Of A Lifetime (Table of Contents: 4)

Characters
Neil Smith; The coach of the county team
Synopsis
Neil Smith, aged 14, is a very good table-tennis player. Between matches he likes to smoke cigarettes. The county team coach sees Neil smoking and admonishes him. He cycles home but, climbing a steep hill, runs out of breath. He decides to give up smoking and to work at improving his game. As a result he is selected to play for the Great Britain national team at a tournament in America. With the money he has saved by quitting smoking, he has been able to afford a new camera. Neil wins his match which is watched by millions on T.V.

The Menace Of The Blob (Table of Contents: 5)

Genre
superhero
Characters
The X-Men [Professor X; Cyclops; Marvel Girl; Angel; Beast; Iceman]; Brotherhood of Evil Mutants [Magneto; Quicksilver; Scarlet Witch; Mastermind; Toad]; Blob
Synopsis
The X-Men graduate from Xavier's school. The Professor says he is taking a leave of absence and puts Cyclops in charge. He shows him his new mutant-detecting machine, Cerebro. Magneto finds the Blob and invites him to join the Brotherhood. During a scuffle, Xavier's mental blocks dissolve and Blob remembers the secret of the X-Men.
Reprints

Story retitled from the original "The Return Of The Blob". This is because the X-Men's first encounter with The Blob (from X-Men #3) was reprinted in Fantastic Annual 1968 (which had not yet been published) rather than in the weekly comic. Therefore, readers of Fantastic would have been confused by the word "return" in the story title. Some explanatory captions are rewritten by an unknown letterer; Two panels from the next segment of the story serve as a preview for next week's issue of Fantastic. They are - panel 1 of page 15; panel 1 of page 16.

The Adventures Of Anglo Ace (Table of Contents: 8) (Expand) /

First Line of Dialogue or Text
Is This The End Of The Link?
Genre
adventure; science fiction
Characters
The Missing Link; Professor Richard Allen; Professor Viktor Kelso; Lita Munro
Synopsis
The Link is about to be shot by some soldiers. At that precise moment, Dr. Viktor Kelso turns up the power of his "Paralyser" device, immobilising everybody for miles around, including the soldiers. The Link, because of his strength, still retains his mobility but is weakened. He goes off to confront Dr. Kelso (who is protected from paralysis by his containment suit.) The Link succumbs to the effects of the Paralyser and collapses. When he comes around, he picks up some "Top Secret" documents which are strewn across the floor just as the soldiers burst in and accuse him of stealing secrets.

The Hands Of The Mandarin! (Table of Contents: 10)

The British editors were uncomfortable about the strong anti-Communist messages which frequently appeared in Marvel stories of this era. Some captions are relettered to remove all references to "red" and "Communism".

Pin-up page. Artist unknown, but it has a slight hint of very early Barry Smith to it. However I could not say with any degree of certainty that it is him.