Unus, The Untouchable (Table of Contents) 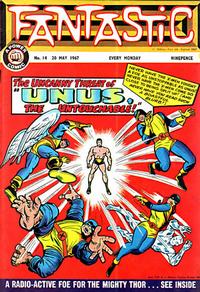 Genre
superhero
Characters
Thor; Jane Foster; The Radioactive Man; General Fu
Synopsis
While on a medical mission to India, Dr. Blake becomes Thor to repel a Chinese attack. In order to fight Thor, a Chinese scientist irradiates himself to gain great power. He fights Thor in New York, and nearly defeats him, but Thor blows him back to China, creating a nuclear explosion.
Reprints

A new text box at the end of this story prepares the reader for "next week's full-length humdinger" in which Thor and Loki attack the human race.

First Line of Dialogue or Text
I Have Always Suspected That You Possess Secrets Unknown To Other Men!
Genre
adventure; science fiction
Characters
The Missing Link; Viktor Kelso; Lita Munro
Synopsis
Dr. Kelso subjects the Link to the effects of his newest invention, "The Brain Thief". However, Kelso's brain is overwhelmed by the process and he loses all self-will. The Link tells Kelso to free him and then to write a full confession of his crimes. The Link calls Lita Munro and arranges to meet her. Munro's telephone line is being tapped by the police. They turn up at the rendezvous point and try to arrest him. He goes crazy, transforms (like the Hulk does but without ripping his clothes) and chases them off. When he has calmed down he tells Lita he doesn't want to see her again.

Unus, The Untouchable! (Table of Contents: 5)

Genre
adventure; superhero
Characters
X-Men [Cyclops; Marvel Girl; The Beast; Iceman; The Angel; Professor X]; Mastermind; Unus
Synopsis
After being attacked by a mutant hating crowd, Beast gets fed up and quits the X-Men. He becomes a professional wrestler but meets Unus, a mutant who cannot be touched. Unus meets Mastermind and asks to join Magneto's Brotherhood. In order to prove himself, he is told to find and defeat one of the X-Men.
Reprints

Characters
Bill (a smoker!); A young teenage boy (unnamed); Johnny
Synopsis
Bill and his young companion are fishing from a small boat on the ocean. The boy wants to know why Bill has taken up smoking. A sudden storm tips them out of the boat. Bill only stays afloat because the lad helps him. Luckily for them, Johnny is nearby. He sees their peril, performs an Olympic dive from a clifftop, and rescues them. Bill blames his lack of fitness on his smoking habit and decides to quit. He buys some new fishing tackle with the money he saves.

Face-To-Face With The Sinister Scarecrow! [Part 2] (Table of Contents: 8)

Genre
superhero
Characters
Iron Man; The Scarecrow; Harold "Happy" Hogan; Virginia "Pepper" Potts
Synopsis
The Scarecrow has stolen some plans from Tony Stark to sell them to Cuba. Iron Man follows the Scarecrow and steals back the plans.
Reprints

The first page of the story recaps the events of the previous issue. The reprinted segments are - panels 3-5 of page 3; panel 7 of page 5