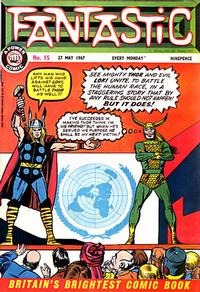 A new text panel at the conclusion of this segment tells readers to sit back and wait for the worst - which will be coming next week!

Genre
superhero
Characters
X-Men [Angel; Beast; Cyclops; Iceman; Marvel Girl]; Unus
Synopsis
Unus is trying to join Magneto's Brotherhood so he takes on the X-Men. The X-Men barely fend him off and find Beast has constructed a machine that will actually increase Unus' powers. The X-Men try to prevent Hank from using the machine, but, once Unus has been zapped, he finds that he cannot even eat without the food being repelled out of his hands. Beast returns him to normal and Unus promises to will steer clear of Magneto.
Reprints

The opening page features X-Men vignettes plus the three panels from page 10 which were omitted from last week's chapter.

Thrill To the Uncanny with Doctor Strange (Table of Contents: 6) (Expand) /

The Missing Link Makes a Dynamic Change to Combat the Animal Man (Table of Contents: 8)

Genre
adventure; science fiction; superhero
Characters
The Missing Link (adopts his Johnny Future persona in this episode); Dr. Viktor Kelso; Lita Munro; The Animal Man
Synopsis
Lita Munro, upset at being dumped by the Link, drives to London. Dr. Viktor Kelso has been found in a mindless state; the police blame the Link for his condition. Meanwhile, the Animal Man, star of Bigby's Circus, decides that the time is right to demonstrate his ability to control all animals. Chaos ensues. He broadcasts his intention to take over the whole country. The link hears the broadcast. He realizes that he cannot battle the Animal Man himself as he is a wanted man. He breaks into a costumiers shop and, with the help of some make-up and a new outfit, emerges as Johnny Future!
Reprints

The Missing Link strip finally completes its evolution into "Johnny Future", the title by which the strip would be known from the next issue.

The Icy Fingers of Jack Frost! (Table of Contents: 11)

Some captions relettered to replace Americanisms with their British counterparts e.g. "Baseball stadium" becomes "football stadium". Some Iron Man stories were reprinted out of published sequence. This created a problem for the editors of Fantastic, because he changed his armor in Tales of Suspense #48 to the familiar red and gold version. In order to avoid confusion for British readers, Iron Man's armor was redrawn in Fantastic #15-20 to resemble the newer model.

The Fantastic Four (Table of Contents: 12)