[See the Desperate X-Men Trapped in the Heart of Europe!] (Table of Contents) 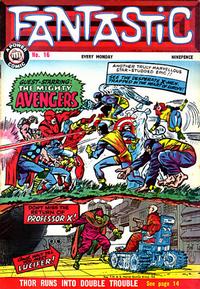 Enter, The Avengers! (Table of Contents: 1)

Genre
adventure; superhero
Characters
The X-Men [Professor X; The Angel; The Beast; Cyclops; Marvel Girl [Jean Grey]; Iceman]; The Avengers [Giant-Man [Hank Pym]; Thor; Captain America; Iron Man; Wasp]; Lucifer; Matilda; Samuel
Synopsis
Xavier has tracked down Lucifer, who cost him the use of his legs, but finds his foe's heartbeat is rigged to a giant thermal bomb. The X-Men arrive in Bavaria and run across the Avengers who have also just arrived. The X-Men have to stop the Avengers from defeating Lucifer since by defeating Lucifer, the world will be destroyed.
Reprints

Genre
adventure; superhero
Characters
Thor [Don Blake]; Loki; Heimdall; Odin
Synopsis
Loki used his magic to cause Thor's hammer to hit his head, turning him evil. Thor then freed Loki. Now the two terrorize Earth until the other Asgardians arrange for another blow to the head to reverse the change.
Reprints

Page 1 is a recap of the first half of the story as seen in the previous issue of Fantastic! It is a paste up of panels 4 & 7 of page 6 and panels 6 & 7 of page 7. Some new text at the story's conclusion informs the reader that Thor's next opponent will be the Demon Duplicator.

But For Real Action, Look For The Greatest Name In Comics... (Table of Contents: 4) (Expand) /

Genre
adventure; science fiction; superhero
Characters
Johnny Future; The Animal Man; Billy
Synopsis
Johnny Future turns up at a national newspaper office and states his intention to take down the Animal Man. This announcement makes front page news. In response, Animal Man commands household pets around the country to turn feral and attack humans. Johnny deduces that the Animal Man is likely to be found at London Zoo, Regents Park. At the zoo, Johnny finds and confronts the villain who orders two leopards to attack him.
Reprints
Keywords
London Zoo (Regents Park)

Billy, a character who appears for just two panels, is seen reading a Spider-Man comic.

The Icy Fingers of Jack Frost Part 2 (Table of Contents: 7)

A 'new' splash page is a paste up of panel 7 of page 6; Jack Frost (detail from the original splash page); panels 5 & 6 of page 10; Some Iron Man stories which appeared in Fantastic were reprinted in a different order to the original published sequence. This created a problem for the editors, because Tony Stark changed his armor in Tales of Suspense #48 to the familiar red and gold version. In order to avoid confusion for British readers, Iron Man's armor was redrawn in Fantastic #15-20 to resemble the newer model.

Humans, Keep Out! (Table of Contents: 8)

Genre
science fiction
Characters
Ezra Grumley
Synopsis
Humans are distressed to discover that the Venusians believe them to be hostile and have built robots to destroy any expedition that lands. A humble janitor thinks of building identical robots, reasoning that the Venusian's robots will not attack things like themselves, allowing peaceful contact to be made.
Reprints

This is the last page of the story reprinted as a pin up page.