[You Have Finally Met the One Enemy You Can Never Defeat, Thor!] (Table of Contents) 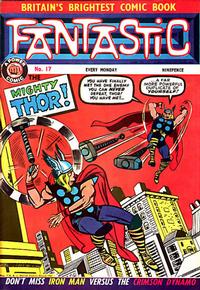 The Demon Duplicators! (Table of Contents: 1)

Some new text at the end of this reprint informs the reader that next week Thor will encounter Merlin the Mad.

Enter, The Avengers! (Table of Contents: 3)

Genre
superhero
Characters
The X-Men [Professor X; The Angel; The Beast; Cyclops; Marvel Girl [Jean Grey]; Iceman]; The Avengers [Giant-Man [Hank Pym]; Thor; Captain America; Iron Man; Wasp]; Lucifer
Synopsis
The X-Men have to battle the Avengers and stop them from defeating Lucifer since, by doing so, the world would be destroyed. After Xavier gives Lucifer a mind blast that renders him unconscious, he contacts his team for help and the Avengers agree to let the X-Men clean up the current crisis on their own. Cyclops uses his eye beams to disable Lucifer's thermal bomb.
Reprints

A Shock For Bully Brown (Table of Contents: 4)

Characters
Jim; Tom; Bully Brown
Synopsis
Tom has acquired some cigarettes from his father. He shares them with his friends. Bully Brown, an older boy, appears and tries to take the cigarettes from Tom by force. Jim, also an older boy, sees the bullying and admonishes Bully Brown. Bully Brown lashes out at Jim, but Jim skilfully outfights him. After taking blows to the stomach and face, Bully Brown runs away. Tom tells the boys that Bully Brown lost the fight because smoking slows him down. Jim advises the boys not to take up smoking. A public service announcement then announces that "Cigarettes Harm Your Health" in large letters.

Genre
adventure; superhero
Characters
Johnny Future; The Animal Man
Synopsis
The Animal Man orders the animals at London Zoo to attack Johnny Future. Johnny prevails against two leopards and an elephant. An enraged Johnny turns his attention to Animal Man who pleads with him to stop. Remarkably, he does! Animal Man realizes that he has control over Johnny. He orders Johnny to commit a high-profile bank robbery. Johnny complies. As he exits the bank, money bags in hands, he is surrounded by police officers who now believe Johnny to be a common criminal.
Keywords
London Zoo (Regents Park)

Some Iron Man stories which appeared in Fantastic were reprinted in a different order to the original published sequence. This created a problem for the editors, because Tony Stark changed his armor in the (already-reprinted) Tales of Suspense #48 to the familiar red and gold version. In order to avoid confusion for British readers, Iron Man's armor was redrawn in Fantastic #15-20 to resemble the newer model; A new text box at the end of this episode tells readers that the plot against Stark thickens and that they should read on - "next ish!"