The Mandarin's Revenge! (Table of Contents) 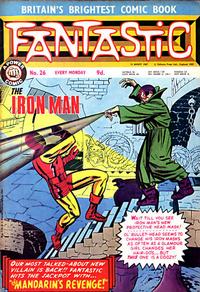 Genre
adventure; superhero; science fiction
Characters
Johnny Future [John Foster]; Humphrey Harwood; Rick Harwood; Professor Jarra (dies in this story); Rego; Renusians; The Master
Synopsis
John Foster is fired from his job. Professor Jarra guesses that John is actually Johnny Future and is about to reveal this fact to the Renusians when he is electrocuted and killed. The Renusians are displeased and decide to replace the employees of Harwood Electronics with lookalikes to garner this information for themselves. (It's lucky for Johnny that he no longer works there!) John meets Rick's lookalike, who fails to recognize him. From this encounter, John realizes that something is amiss and resolves to do something about it as... Johnny Future!
Reprints

Among Us Stalk...The Sentinels! (Table of Contents: 7)

Some new text has been added at the end of this segment declaring that "holiday time's over for the teenage mutants". Readers are alerted to the "awesome menace of 'The Sentinels' - next week!" A group picture of the X-Men accompanies the text. This is a detail from the cover of X-Men #10 (March 1965).

Bonanza Ben, Hoss and Little Joe are on the move! (Table of Contents: 8) (Expand) /

Don't Miss It! See the Defeat of Dr. Strange in Terrific now! (Table of Contents: 9) (Expand) /

Genre
advocacy
Characters
Bill (a smoker!); A young teenage boy (unnamed); Johnny
Synopsis
Bill and his young companion are fishing from a small boat on the ocean. The boy wants to know why Bill has taken up smoking. A sudden storm tips them out of the boat. Bill only stays afloat because the lad helps him. Luckily for them, Johnny is nearby. He sees their peril, performs an Olympic dive from a clifftop, and rescues them. Bill blames his lack of fitness on his smoking habit and decides to quit. He buys some new fishing tackle with the money he saves.

An anti-smoking PSA previously run in #14. Also appears in Pow! and Wham! #75, and (reformatted as a half page strip) numerous issues of TV Century 21.

The Mandarin's Revenge! (Table of Contents: 12)

Job Number
X-672
Genre
superhero
Characters
Iron Man [Tony Stark]; The Mandarin
Synopsis
He attacks the Mandarin in his castle, but he is captured.
Reprints

A 'new' splash page recaps the events from the first half of this story. It is made up of three images, one of which was reprinted in last week's Fantastic! (#25) and, somewhat confusingly, two panels from this week's story segment presented as a flashback! They are: The Mandarin - detail from panel 1 of page 8; Iron Man - detail from panel 4 of page 9; Iron Man trapped by some cables - panel 5 of page 12

Pin-up page that also appears as the back cover of Terrific #18. Includes a plug for Fantastic's sister paper Smash where the Daredevil strip was just starting.