The Grey Gargoyle! (Table of Contents) 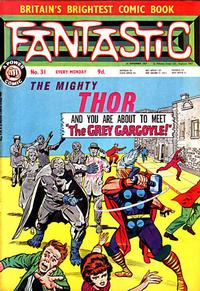 When the Grey Gargoyle Strikes! (Table of Contents: 1)

Will the grey Gargoyle with his fantastic powers succeed? The new text added to the final panel of page 10 asks this question and goes on to instruct the readers that they must get next week's "ish" to find out!

For a Barrage of War Action Thrills read Sgt Fury and his Howling Commandos (Table of Contents: 3) (Expand) /

The Adventures of Anglo Ace (Table of Contents: 4) (Expand) /

The Supreme Sacrifice (Table of Contents: 5)

A 'new' splash page serves to recap past events and to introduce this segment of the story. It consists of two panels from X-Men #15 (December 1965) - panel 1 of page 8 and panel 2 of page 9; *Master Mold's name is changed to the British spelling of "Master Mould" throughout this reprint.

Harry Lets Himself Down (Table of Contents: 6)

Genre
drama
Characters
Harry [a champion swimmer who takes up smoking]; Derek [Harry's younger brother]
Synopsis
Harry wins all of his competitive swimming races and then decides to take up smoking. On a visit to the coast, Harry and his younger brother, Derek, spot a swimmer in trouble. They both swim out to rescue him, but it is non-smoking Derek who gets there first! Harry learns that "smoking is a mug's game!"

The Uncanny Unicorn (Table of Contents: 10)

This story took place during Iron Man's original tenure as an Avenger. Readers of, Terrific!, a sister magazine, were concurrently reading reprints of The Avengers from the era of "Cap's Kooky Quartet", i.e. after all of the founder members had taken a leave of absence. The presence of Thor, Giant-Man and Wasp serving as Avengers in this story was explained in two new captions (panel 3 of page 3 and panel 6 of page 4). Readers were told "- this story dates from the time when the original Avengers were still operating together."; An additional caption appended to the final panel urges readers not to miss the next issue.

The Incredible Hulk (Table of Contents: 11)