The Uncanny Unicorn (Table of Contents)

Cover taken from an unaltered stat. Info per Nick Caputo. 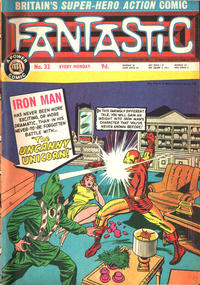 When the Grey Gargoyle Strikes! (Table of Contents: 1)

Job Number
X-725
Genre
adventure; superhero
Characters
Thor [Donald Blake]; Grey Gargoyle [Paul Duval]; Jane Foster
Synopsis
During their battle, the Grey Gargoyle turns Thor into stone. Thor topples over, striking his cane as he does so. He transforms into Don Blake and, as Blake, is compelled to continue the battle. Via trickery, Blake tricks the Gargoyle into falling into the river and his stone body sinks to the bottom.
Reprints

Genre
adventure; superhero
Characters
The X-Men [Professor X; Cyclops; Marvel Girl [Jean Grey]; Angel; Beast; Iceman]; Magneto; Mr. Worthington; Mrs. Worthington
Synopsis
In the aftermath of their battle with the Sentinels, Hank, Bobby and Scott are taken to the hospital with injuries. Iceman is delirious in a coma but his companions recover quickly. When Warren's parents call and say they are dropping by for a visit, Angel flies back to the mansion where he is attacked by a mysterious stranger. Xavier and Cyclops, worried with no word from Angel, also return home and are attacked.
Reprints

In a new text box on the final panel of page 10, we are informed that the nameless being will be revealed next week! But not until Professor X and his X-Men have felt the lash of his incredible powers! The editor signs off with "'Nuff said! Just be here!!!"

First Line of Dialogue or Text
Even a cannon couldn't have hurled that gadget with greater power!
Genre
adventure; superhero
Characters
Johnny Future [John Foster]; An army of 20-foot tall Stone Age men; Rick Harwood
Synopsis
The killer giant throws the agitator at Johnny, who catches it and flies it to a distant location. The giant then grabs Rick and drops him into the ocean. Rick escapes by holding his breath and swimming away. Back on the island, more giant men appear.

The Uncanny Unicorn (Table of Contents: 9)

Kraven the Hunter (Table of Contents: 10)

A full-color reprint on the back cover of the issue.