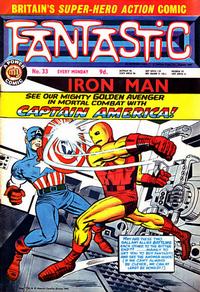 At the Mercy of Loki, Prince of Evil! (Table of Contents: 1)

When this reprinted adventure appeared, sister magazine "Terrific" was running tales of The Avengers from the era after Thor had taken a leave of absence. A new text panel on page 2 explains that, when this story was written, Thor was a member of the old Avengers team.

The Gang Gets the Message (Table of Contents: 2)

Genre
adventure
Characters
Jimmy; Constable Hayes; Slasher Brown
Synopsis
Jimmy is new to the area. He joins a local gang. When he refuses a cigarette he is branded as a "cissy". Enter local bully, Slasher Brown, who asks for "protection" money. Jimmy stands up to him and is beaten up. The gang is impressed with Jimmy's courage. Constable Hayes invites Jimmy to join the police boxing and judo club. Next time Slasher Brown shows up, cigarette in mouth, Jimmy throws him to the ground. The rest of the gang pile in and see off the bully. The gang then agree to give up smoking and to follow Jimmy's example by joining the boxing and judo club.

The Treasure of Planetoid 12! (Table of Contents: 3)

Genre
science fiction
Characters
Charlie Nast; Sam
Synopsis
In the year 2100 a criminal hijacks a spaceship to be the first man to claim the treasure of Planetoid 12. When he gets there, he finds nothing but water and mud. He thinks that it might be oil or something valuable, but after he drinks it he knows that it is merely water. The pilot that he forced along at gunpoint thinks he knows where the treasure is, but the criminal refuses to believe there is a treasure on Planetoid 12 at all until he reverts back into an infant. The pilot has realized the treasure is the fountain of youth.
Reprints

Characters
The X-Men [Professor X; Cyclops; Marvel Girl [Jean Grey]; Angel; Beast; Iceman]; Magneto; Mr. Worthington; Mrs. Worthington
Synopsis
Xavier and Cyclops, worried with no word from Angel at the X-Mansion, return to the school and are attacked and defeated. Beast and Jean then show up and are also taken down. As Warren's parents arrive at the mansion, they are greeted by Magneto.
Reprints

First Line of Dialogue or Text
I don't know how I'm going to overpower that Stone-Age giant - but somehow I've got to!
Genre
adventure; superhero
Characters
Johnny Future [John Foster]; Many 20-foot tall Stone Age men (all die); The Master; Humphrey Harwood; Rick Harwood [his son]
Synopsis
The evolution speeder was left switched on after Dr. Felda and his assitant were killed. It it busily creating an army of giant, savage Stone Age men. The Master, unable to get a response from his lackeys, decides to destroy the whole island. All of the Stone age men are instantly killed. Johnny Future, flying above the island and contemplating landing, is blown out to sea by the blast and, by an amazing coincidence, splashes down right next to Rick who is struggling to stay afloat after the events of last issue. Johnny rescues Rick and then slips away to reappear again as John Foster.

In Mortal Combat with Captain America (Table of Contents: 10)

The Chameleon (Table of Contents: 11)