Every Hand Against Him! (Table of Contents) 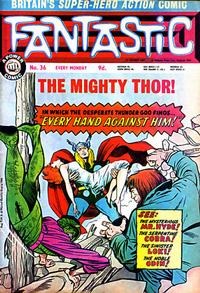 Every Hand Against Him (Table of Contents: 1)

Characters
Thor; Odin; Heimdall; Jane Foster; Don Blake; Loki; Cobra; Mr. Hyde
Synopsis
Thor, although banished from Asgard, battles his way into the home of the gods in order to confront Loki. Odin appears and Thor explains that his former actions were a result of Loki's trickery. Odin allows Thor to return to Earth where he battles the Cobra and Mr. Hyde. He rescues Jane Foster but she is critically ill. Whirling his hammer, Thor creates a vortex around Jane in which time stands still. This will afford him the opportunity to finish his battle with Cobra and Hyde.
Reprints

A 'new' splash page includes some narrative exposition, panels 5-6 from page 8 of the original story and a dramatic image of Thor reprinted from the splash page of the Thor story in Journey Into Mystery #107 (August 1964)

Want To be a Helicopter Pilot An Expert Marksman Double Agent (Table of Contents: 2) (Expand) /

First Line of Dialogue or Text
We've got him cornered
Characters
Johnny Future [John Foster]; Mr. Opposite
Synopsis
As a consequence of being mind controlled by Mr. Opposite, Johnny has been on a wild rampage in London. The army is called in to subdue him. Mr. Opposite releases from his thrall and he surrenders. Johnny is jailed and ponders his situation. Mr. Opposite then mind-controls the soldiers and causes them to wreak havoc on the streets.

Suspected of Murder! (Table of Contents: 6)

The UK editors were keen to remove apparent slurs against Communist countries from these reprints. Accordingly, some text panels were rewritten. An example of this is on page 10, panel 5 where the phrase "Natasha is heading for an Iron Curtain slave nation" is replaced with "Natasha has been captured by foreign agents".

Genre
superhero
Characters
The X-Men [Professor X; Cyclops; Marvel Girl [Jean Grey]; Angel; Beast; Iceman]; GUESTS: Zelda; Vera (first appearance); VILLAIN: Mimic [Calvin Rankin] (first appearance, origin)
Synopsis
Bobby and Hank tussle with mysterious Calvin Rankin, who beats them by mimicking their powers. Calvin then has an encounter with Jean at a restaurant. Realizing he is dealing with the X-Men, Calvin follows Jean home and asks to join them. Once he has absorbed all of their powers, he announces his intention to defeat them all in battle.
Reprints

The Human Torch (Table of Contents: 8)