The X-Men v The Mimic (Table of Contents) 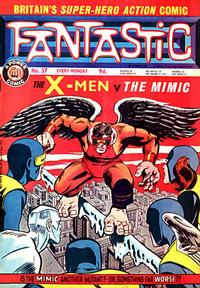 The Power of the Thunder God! (Table of Contents: 1)

Characters
Thor; Odin; Balder; Jane Foster; Loki; Cobra; Mr. Hyde
Synopsis
Thor battles the Cobra and Mr. Hyde while Jane Foster hovers close to death. Odin's heart begins to soften towards Jane, thanks to the intervention of Balder. Odin, in his infinite wisdom, commands Loki to deliver a message to Hardol, the mystic healer, who lives beyond the molten chasm. Loki has no choice but to obey but, before he can embark on his mission, is waylaid by Balder and some other gods who, for some reason, distrust him. Balder plans to deliver the message himself.
Reprints

The final panel of this story segment is replaced by some text entreating readers to read "next week's ish!!"

The Adventures of Anglo Ace (Table of Contents: 3)

Characters
Anglo Ace
Synopsis
Anglo Ace is dining out with friends. The meal is interrupted by a disheveled-looking firefighter who has been looking for him. It seems that a tanker has caught fire at the docks. Its proximity to some oil-storage tanks means that the whole town could blow. Anglo Ace surrounds the ship in a giant Anglo bubble and tows it out to sea where it explodes. Anglo Ace is thanked for saving the town in the nick of time. He then makes up for his lost dinner by eating some Anglo Bubbly bubble gum.

First Line of Dialogue or Text
Whoomp!
Characters
Johnny Future [John Foster]; Mr. Opposite; Curly "King" Kalo
Synopsis
Mr. Opposite has used his power of mind-control on the army, causing them to recklessly fire weapons in London's streets. In jail, Johnny wonders how Mr. Opposite can be defeated. He has an idea. He busts open his cell door, and the doors of fellow inmate, the notorious Curly "King" Kalo and one of Kalo's henchmen. The prison governor watches and vows, as the three escapees stride through the prison with impunity, that this is as far as they will get.

Characters
The X-Men [Professor X; Cyclops; Marvel Girl [Jean Grey]; Angel; Beast; Iceman]; Mimic [Calvin Rankin] (origin)
Synopsis
The Mimic has absorbed all of the X-Men's powers. He battles them and captures Jean. The team follows him to his hideout deep in an old mine. Mimic uses his powers to uncover a machine his father built that will allow him to keep the combined powers for good. Xavier allows Mimic to use the machine which doesn't give him powers but strips his mimic powers away.
Reprints

The Death of Tony Stark (Table of Contents: 9)

Genre
superhero
Characters
Iron Man [Tony Stark]; Pepper Potts; Happy Hogan; Inspector Flint; Mandarin; Koto (robot)
Synopsis
Pepper and Happy, still unsettled by Tony Stark's disappearance, go to Iron Man and tender their resignations. The following day, Happy, playing detective, breaks in to Stark's home. Tony is wearing his armor but not his helmet. He conceals his armor by jumping into bed. He assures Happy that all is well and that Iron Man should be trusted. Enter: the Mandarin. Using his giant space-laser he destroys much of Stark's factory. Iron Man disguises himself as a bearded man in a large coat, and boards a plane for China. He confronts Koto, the Mandarin's robot, and is defeated.
Reprints