[At Last! The Thunder God Reveals His True Identity to Jane] (Table of Contents) 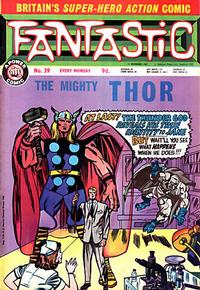 Genre
superhero
Characters
Iron Man [Tony Stark]; Pepper Potts; Happy Hogan; Phantom [Dr. Birch]
Synopsis
Pepper and Happy are mourning Tony Stark's "death". Meanwhile, Stark builds a transistorized chest device that enables him to appear in public without his armor. Stark then leaves his lab, revealing that he is very much alive. This revelation causes Pepper to faint. Stark realizes that Happy loves Pepper. Stark then upsets an employee, Dr. Birch, by not making time to speak to him. Iron Man goes on to stop industrial saboteur the Phantom, who turns out to be an embittered Dr. Birch. Pepper and Happy go on a date. Tony is left alone to brood because he secretly loves Pepper too.
Reprints

Genre
superhero; fantasy-supernatural
Characters
Thor; Jane Foster; Odin (guest star); Don Blake; Balder (guest star); Loki (villain); Grey Gargoyle (villain)
Synopsis
Thor upsets Odin again by declaring his love for Jane Foster. Don Blake reveals his secret identity to Jane, but she doesn't believe him. He stamps his cane and nothing happens because, unknown to him, Odin has removed the enchantment which allows him to become the God of Thunder. The Grey Gargoyle appears and attacks Don and Jane. They flee. A group of Thor's friends meet to discuss how they can aid Thor even though Odin has forbidden them to help him.
Reprints

First Line of Dialogue or Text
Last week we saw Johnny wrap up Mr Opposite!
Genre
adventure; science fiction; superhero
Characters
Johnny Future [John Foster]; Villain: The Master; Villain: The Brain; Villain: The Brute; Villain: The Hunter; Rick Harwood
Synopsis
As Johnny's heroic exploits are broadcast on T.V., the Master assembles a trio of ne'er-do-wells to bring him down. Rick Harwood bids goodnight to John Foster as he leaves the Harwood Electronics building in London. He reaches the street just in time to witness a giant hawk menacing pedestrians.
Reprints
Keywords
London

Characters
John (a smoker); Graham (John's younger brother)
Synopsis
John and his younger brother, Graham, are rock climbing when Graham breaks a bone in his leg. John goes off for help, stopping on the way for a quick smoke. Later, John brings a mountain rescue team back to the scene of the incident. Graham has by now fainted. Graham rues the fact that, if he hadn't been winded as a result of his smoking habit, they would have got back to Graham sooner. John gives up smoking and is able to tackle more difficult climbs as a result of his improved fitness.

Genre
superhero
Characters
The X-Men [Professor X; Cyclops; Marvel Girl; Angel; Beast; Iceman]; V: Lucifer; the Blob (cameo); Unus the Untouchable (cameo)
Synopsis
Professor Xavier relates the events of his first encounter with Lucifer. The story explains how the professor lost the use of his legs. The X-Men board a jet and prepare to confront Dominus.
Reprints

The Grey Gargoyle (Table of Contents: 12)