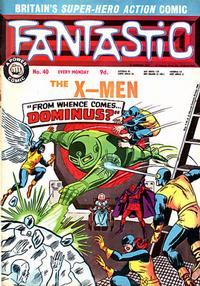 A Fantastic Look at Signs! (Table of Contents: 3)

All These Great Ideas for Christmas come from Airfix (Table of Contents: 4) (Expand) /

First Line of Dialogue or Text
Destroy Johnny Future!
Characters
Johnny Future [John Foster]; Villain: The Brain; Villain: The Brute; Villain: The Hunter; Villain; a giant robotic hawk
Synopsis
A giant hawk menaces London. It perches on the clock tower of Big Ben. The three super-villains engaged by The Master in last week's episode engage in some narrative exposition. The Hawk sees Johnny and dives towards him. Johnny allows himself to be carried off in the hawks talons. The hawk carries Johnny away from London. They are intercepted and fired upon by some R.A.F. Lightning aircraft. The hawk is hit and plummets earthwards, still carrying Johnny.
Keywords
London; The Clock Tower of Big Ben; Trafalgar Square

Genre
superhero
Characters
The X-Men [Professor X; Cyclops; Marvel Girl; Angel; Beast; Iceman]; Villain: Lucifer
Synopsis
The X-Men are attacked by some cowboys as they investigate the area around Lucifer's lair. However, they are no match for the mutants and they depart. During the melee Professor X is captured by some flying robots and taken to Lucifer.
Reprints

The Fantastic Four the Greatest Super-Hero Foursome in Comic-dom?!! (Table of Contents: 8) (Expand) /

Lids off! and the Christmas Fun Begins (Table of Contents: 10) (Expand) /

Want To be a Helicopter Pilot An Expert Marksman Double Agent (Table of Contents: 11) (Expand) /