Now, By My Hand Shall Die A Villain! (Table of Contents) 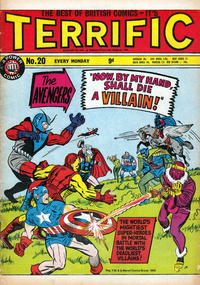 Moment of Truth (Table of Contents: 1)

Genre
superhero
Characters
Sub-Mariner [Namor]; Dorma; Lord Vashti; Krang
Synopsis
Namor brings Krang and Dorma back to Atlantis to face judgment. To settle the question of leadership once and for all, Namor decides to battle Krang in front of his assembled subjects. So his extraordinary powers do not give him an unfair advantage, Namor battles unarmed while Krang is permitted to use any weapons that he chooses. Even armed to the teeth, Krang is unable to defeat the avenging son. Namor imprisons Krang in the deepest depths of the ocean while Dorma is restored to his favor.
Reprints

A number of uncredited artists are involved in this story, providing alterations, additional art and inking, starting on page 5. Frank Giacoia appears to have inked most of pages 5-6 and part of page 11. Marie Severin redrew the figure of Krang from page 6 on and Dick Ayers inked the majority of pages 7-12. Info per Nick Caputo, September 2014.

Now, By My Hand, Shall Die a Villain (Table of Contents: 3)

A 'new' splash page is a paste-up of the Black Knight from page 10 (panel 5) and the Avengers from the cover of Avengers #10. Some crudely drawn skyscrapers have been added by an unknown 'artist' to fill some space.

Face-to-Face at Last With Baron Mordo! (Table of Contents: 5)

Genre
superhero
Characters
Dr. Strange; The Demon; The Ancient One; Hamir (unnamed); Baron Mordo; Dormammu; Clea (unnamed); Clea's father (unnamed)
Synopsis
Dr. Strange reaches his Greenwich Village home safely but discovers one of Mordo's followers has taken over his sanctum. In a hidden cave in Tibet The Ancient One's servant questions the meaning of his ailing master's word "Eternity". Strange bluffs his way into his sanctum but when he attempts to consult the All-Seeing Eye he discovers it's been booby-trapped, sending a signal to Mordo and Dormammu of his whereabouts. Strange battles Mordo, but soon realizes his foe is more powerful than usual; when Dormammu speaks through Mordo he comprehends why as he vanishes from sight.
Reprints

Characters
Don Starr; The Actor; Headhunter
Synopsis
Deep within The Actor's lair Don is trapped in a quicksand-filled room. He is attacked by a sword-wielding maniac. Don moves his arms with lightning speed, turns the tables on the aggressor and makes his escape to another room, much to the chagrin of The Actor. He sees some men who are imprisoned there and helps them to escape. The actor fires a steel dart at Don. It misses, but hits some electrical cables, creating a blast which renders Don unconscious. A small fire starts next to Don's body. The Actor, instead of attending to the blaze, curses Don and vows to see him burn.

The Melter (Table of Contents: 9)