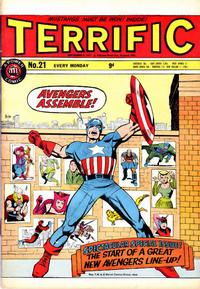 A Stranger Strikes from Space! (Table of Contents: 1)

Genre
superhero
Characters
Sub-Mariner [Namor]; Lord Vashti; Lady Dorma; Attuma (villain)
Synopsis
A giant alien robot accidentally falls out of a passing spaceship and into the lap of Attuma in depths of the ocean. He decides to use this turn of good fortune to destroy Namor and Atlantis.
Reprints

Nick Caputo suspects that Carl Hubbell provided alterations on several figures throughout the story, particularly on pages 5, 10, 17 and 20, per his blog:

A Nameless Land, a Timeless Time! (Table of Contents: 8)

Characters
Dr. Strange; Baron Mordo; Dormammu; Clea (unnamed); Shazana; Shazana's sister (unnamed); The Ancient One; Hamir (unnamed)
Synopsis
Mordo gloats at his apparent triumph, Dormammu tells him that Strange still lives! Clea wishes she could warn Strange about Dormamu. Strange arrives in a world ruled by Shazana, a female tyrant. Believing her sister has recruited Strange to overthrow her, she battles Strange into submission. Allowing himself to be imprisoned so he can recover from his earlier battle with Mordo, Strange gets the lay of the land, then helps Shazana's sister overcome the evil ruler, destroying the source of her power even as he uses it to begin his journey back home.
Reprints

Part 4 of 17. The sisters in this story apparently served as the inspiration for Craig Russell's later Strange epic, a virtual remake of this story, which he did twice-- in DR. STRANGE ANNUAL #1 (December 1976), and DR. STRANGE: WHAT IS IT THAT DISTURBS YOU, STEVEN? (October 1997).

Characters
Don Starr; The Actor; Chief of Special Security (unnamed)
Synopsis
The Actor wants to make sure that Don perishes in the fire, but is forced to flee when the ceiling begins to collapse. One of the men rescued by Don in last week's episode returns and helps him to escape a fiery doom! Later, Don and the Chief of Special Security cobble together a plan to flush The Actor out of hiding. The Actor takes the bait.