This cover is referred to in an episode of the "Buffy the Vampire Killer" tv series. The skeletal figure on the cover is not actually Wonder Woman, but Artemis, the Wonder Woman of Ancient Greece. 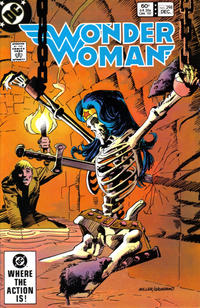 It is revealed the Aegeus' terrorists have taken refuge on Themyscira, the original island home of the Amazons in Ancient Greece. The island is uncharted, and has mysterious properties that allow it to disappear and appear. Bellerophon refers to the purple ray, which hasn't been mentioned in the series for many years.

The Squeeze on Gotham! (Table of Contents: 2)