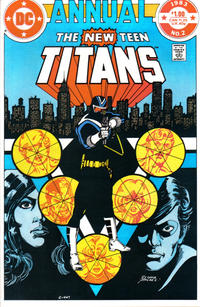 The Murder Machine (Table of Contents: 1)

Job Number
J-8883
Genre
superhero
Characters
Cheshire (introduction, villain); Teen Titans [Robin [Dick Grayson] (Earth-1); Cyborg; Changeling [Gar Logan]; Wonder Girl [Donna Troy]; Starfire [Koriand'r]; Kid Flash [Wally West]; Terra [Tara Markov]]; Monitor (silhoutetted); Lyla [Harbinger] (introduction); Vigilante [Judge Adrian Chase]; Anthony Scarapelli (villain)
Synopsis
Judge Adrian Chase is targeted by mob boss Anthony Scarpelli for presiding over his corruption trial. The Teen Titans protect him, but are attacked by minions sent to Scarapelli by the Monitor, after he contacts him for assistance. Judge Chase later dons the guise of Vigilante and aids the Titans, unbeknowst to them, as he assassinates each villain they are fighting, as only Cheshire escapes wth her life. Eventually Scarapelli is apprehended by the Titans and faces true justice, while Chase is made by the feds to 'disappear' for a new life.
Reprints