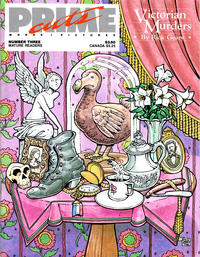 Synopsis
Table of contents plus a quote from Natalia Ginzberg

The Final Curtain (Table of Contents: 4)

Synopsis
Illustration of a farm strewn with debris. A grinning goat and a standing cow wearing overalls are in the foreground.
Reprints

First Line of Dialogue or Text
"When are we going to be there?" Susan asked the shadowy parent
Characters
Susan; Mother; Grandmother; Grandpa
Synopsis
Story is about a girl who is driven to a farm to visit her grandparents. Five small illustrations included.
Reprints

Mysteries of the Flesh (Table of Contents: 9)

Synopsis
The first chapter revealing the findings of a theory called "Mysteries of the Flesh" by the narrator.

A Night in the Woods (Table of Contents: 10)

Characters
Trenchard; Jennie; Pontz
Synopsis
The American writer's story about a married couple who after thirty years of marriage are sent to jail.

Would You Like to Have Sex With This Magazine? (Table of Contents: 11) (Expand) /

Synopsis
The drawing is of a fox in suit and tie sitting next to a tree named "Madison Ave." The fox is sitting with an open book.
Reprints

This is the front cover to one of Crumb's self-published fanzines from the early sixties. Not to be confused with the Seventies anthology series.

Synopsis
The image shows a shirtless fat man sitting on several sacks of money, surrounded by several dozen men brandishing swords. It is titled "The American Revolution of 1960"
Reprints

Synopsis
The image is of an almost completely sunken ship with several people on the topmost point. The ship's name is "Bigotry and Racial Prejudice."
Reprints

Genre
humor; anthropomorphic-funny animals; satire-parody
Characters
Fritz the Cat; Sniff the Panda; Mr. Denny; Flossy the Panda; Mae
Synopsis
Fritz and his married friends were planning to have a picnic. Unfortunately, the couple's arguing puts a damper on it. Later on, Fritz gets into some trouble when he grabs a bunch of helium balloons.
Reprints

The story is dated May 4, 1961. Previously unpublished.

Synopsis
Brief blurbs on the creators

Call of the Spirit (Table of Contents: 19)

Genre
religious
Characters
Jesus; Joseph; Mary
Synopsis
An enigmatic tale taken from the Gnostic manuscript "Pistis Sophia." A child looking just like Jesus arrives at Joseph and Mary's house. Jesus, who has been working nearby, states that he's been waiting for him.
Reprints

Treasure of the Lost Empire Chapter 3 (Table of Contents: 20)

Genre
humor
Characters
Will; Buddy Smudley; Rory Randall; Dick Pritkin; Cindy Lou
Synopsis
While Rory takes a swig of the poisoned drink, Buddy may have had a change of heart. But his doubts may have come too late.