This issue contains different content than what had been originally solicited (the solicited content ended up in Superman Annual #13). This change was announced by a press release on 2007-09-18, and also mentioned as an editor's footnote on the title page.
This issue has variants:

The Search Begins for the Third Kryptonian! (Table of Contents) 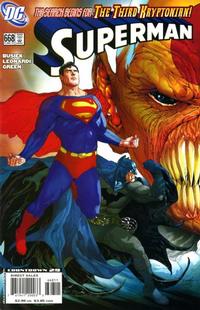 The Third Kryptonian Part One: The Hunt (Table of Contents: 1)

Genre
superhero
Characters
Superman [Clark Kent; Kal-El]; Dominators; Amalak; Batman [Bruce Wayne]; the Auctioneer (flashback, cameo); Power Girl (flashback, cameo); Krypto (flashback, cameo); Chris Kent [Lor-Zod]; Robin [Tim Drake]; Flash [Wally West] (cameo); Kanjar Ro (cameo); Talam-Sa; Supergirl [Kara Zor-El] (cameo); Karsta Wor-Ul (cameo); Pig Iron (on a watch)
Synopsis
Superman enlists Batman to help him find the third Kryptonian on Earth, as detected by the Auctioneer. Chris Kent escapes from school, but Superman finds him and takes him with him to the Batcave. At Superman's request, Batman incorporates a red sun projector into a watch for Chris, to inhibit his powers while at school. Amalek, having heard of Superman from the Auctioneer, comes to Earth, and observes at first, discovering two other Kryptonians (Supergirl and Chris), and hears that Superman is looking for another. He decides to wait until all are found, to slay them all.
Reprints
Keywords
Batcave

Story continues in the next issue. This story was originally scheduled for issue #669, but got moved up one issue. The "K. Wells" on the mailbox is a homage to the Silver Age Superwoman, whose name was Kristen Wells.