This issue contained different content than what had been originally solicited (the solicited content ended up in the previous issue). This change was announced by a press release on 2007-09-18.

Who is the Third Kryptonian? (Table of Contents) 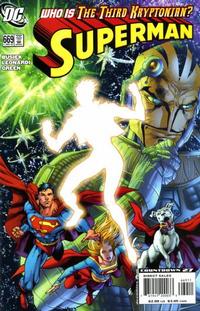 The Third Kryptonian Part Two: The Escape (Table of Contents: 1)

Genre
superhero
Characters
Superman [Clark Kent; Kal-El]; Karsta Wor-Ul (origin); Ro-Kul (flashback, dies); Amalak; Batman (cameo); Admiral Dru-Zod (flashback, cameo); Kev-Dal (flashback, cameo); Ensign Kat Sem-Arr (flashback, cameo); Jav-Nur (flashback, cameo, dies); Doro-Sul (flashback, cameo, dies); the Auctioneer (flashback, cameo); Silver Twist
Synopsis
With Batman's help, Superman tracks down the third Kryptonian that the Auctioneer found on Earth. After an initial confrontation, they talk, and she tells her story. She and other Kryptonians were serving as peacekeepers in the Kryptonian Empire's Navy, but decided to go AWOL when recalled to Krypton after a shift from a military-based empire to a science-based government. After many years of piracy and adventure, including killing people, she met and paired off with Ro-Kul. They left piracy behind, and settled down for over a century. On a visit with other Kryptonians on a local planet, they were attacked by Amalak, but were able to escape and go on the run. But over time, all other known Kryptonians were tracked down and killed, including Ro-Kul. After decades on the run, she hears about Superman, and goes to Earth to hide in his shadow, figuring any attack on him would be an early warning to leave. As she prepares to leave, Amalak (who has been listening in) attacks.
Reprints
Keywords
Kandor; Wegthor (Krypton moon)

Story continued from the previous issue, and continues in the next issue. This story was originally scheduled for issue #670, but got moved up one issue. The Earth name that Karsta picks, "Kristen Wells", is a homage to the silver age Superwoman, whose name was Kristen Wells.