This issue contained different content than what had been originally solicited (the solicited content ended up in the previous issue). This change was announced by a press release on 2007-09-18.
This issue has variants:

Together Again... ...For the Last Time?! (Table of Contents) 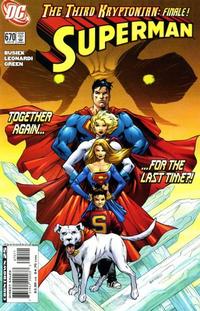 The Third Kryptonian Finale The Stand (Table of Contents: 1)

Genre
superhero
Characters
Superman [Clark Kent; Kal-El]; Power Girl; Supergirl [Kara Zor-El]; Krypto; Chris Kent [Lor-Zod]; Karsta Wor-Ul; Amalak (origin); Talam-Sa; Batman; Admiral Dru-Zod (flashback, cameo); Lois Lane (cameo); Vulcan Son of Fire (cameo); Jor-El (flashback, cameo); Lara (flashback, cameo); Rinoti; Enervator; Brain-Ripper; Duplorian Hawk; Superman Robots (cameo); Legion of Super-Heroes (statues)
Synopsis
Amalak's forces attack Supergirl, Power Girl, and Krypto, while Amalak himself goes for Superman and Karsta, the third Kryptonian that Superman just found. Karsta runs, but Superman attacks, and is overwhelmed by weapons intended for Kryptonians. After hearing that they are looking for others and especially Kandor, he retreats, warning Lois to get Chris to safety before he's attacked. Amalak has let him go to track him to Kandor. Superman goes to his old Amazon fortress, and is overcome there by Amalak. He puts a brain-ripper on Superman and himself to pull the location of Kandor, but Superman's incredible will overcomes it, causing feedback and allowing Superman to read Amalak's mind. He finds out that Amalak's people rebelled against Krypton's empire, and Dru-Zod ordered the entire population of the planet Rinoti to be destroyed as an example. Amalak returned from being off-planet, and discovered what happened, and vowed vengeance. Supergirl, Power Girl, and Krypto rescue Superman, but Amalak had gotten enough from Superman's mind to know that Kandor is in Superman's Arctic fortress, and goes there. Batman, who had been listening when the attack started, goes to that fortress to defend it using a Kryptonian battle suit. He manages to delay Amalak long enough for the others to escape from Amalak's men and go to the fortress. But Amalak has found Kandor, just to discover it's not the one he was looking for; it's not Kryptonian. He dashes it to the ground, and it disappears. The fight is on, with Superman's team losing, until Chris (who has been listening) can stand it no longer, and joins in. And finally, Karsta, changing her mind about fleeing the planet, also joins in, and together they finally defeat Amalak. Karsta decides to take him and his crew to the space authorities, facing any consequences of her previous actions too.
Reprints
Keywords
Kandor

Story continued from the previous issue. This story was originally scheduled for Superman Annual #13, but got moved here. The story does have sub-chapter titles: "Prologue," "Secrets," "The Fortress," "Disaster," and "Epilogue."