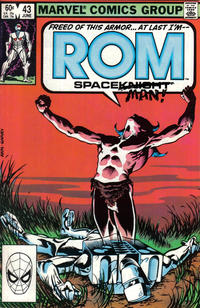 Genre
science fiction; superhero
Characters
Dr. Dredd (villain); Starshine; Rom Clone; Quasimodo (villain); Dire Wraiths (villain)
Synopsis
Quasimodo has cloned a copy of Rom's human body and turned him into a man once again. Rom is thrilled until his new body begins to rapidly deteriorate. Quasimodo possesses Rom's vacant space armor and turns on the Wraiths he was allied with. Dr. Dredd and Starshine show up and begin to battle Rom, not realizing it is now someone else inside of the armor. Starshine drives Quasimodo from Rom's body as the dying human Rom chokes out Dredd. Brandy (who is now in the Starshine armor), recognizes the decaying human as Rom just as he collapses in the throes of death.
Reprints