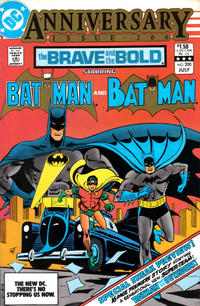 Smell of Brimstone, Stench of Death! (Table of Contents: 1)

Job Number
J-8562
Genre
superhero
Characters
Batman (flashback-1955); Brimstone [Nicholas Lucien]; Commissioner Gordon (flashback-1955); Robin (flashback-1955); Joker (present; cameo); Pinstripe (flashback- 1955); Jojo (flashback- 1955); Warden Craddock (present); Dr. Lincoln (present) (all Earth-2); Batman; Dr. Joan Lincoln; Samuel Bridgeman Night; Carlotta Hernandez; Rabbi David Kline; Commissioner James Gordon; Alfred Pennyworth; Brimstone [Nicholas Lucien] (spirit only); Nicholas Lucien; The Demons (street gang); Clarisse; (all Earth-1 in the present)
Synopsis
The story explains how 2 different personas for Brimstone exist: Both aware somehow of each others' existences on a spiritual level. In 1955, on Earth-2, Brimstone's defeated by Batman and sent to prison, but later transfers his 'spiritual' essence to his doppelganger on Earth-1 in 1983 to restart his criminal empire. He learns of a Batman on this world, but is also defeated here by him. When his essence returns to its own body, it is a vegetable by this time, trapping him there for the rest of his natural life, while his 'good' Earth-1 counterpart is unaware of what happened.
Reprints

Last appearance of the Earth-2 Joker

Genre
superhero; satire-parody
Characters
Bat-Mite
Synopsis
An editorial posed by Bat-Mite to the editors as to why he wasn't included in this issue, and that he should get his own series, before he's "erased" off the page by an artist. Bat-Mite then comments that it wasn't funny as to his "erasure."
Reprints

Batman and the Outsiders (Table of Contents: 4)

"Cover" of the Special Batman and the Outsiders Preview. Letters credit from http://kleinletters.com/.

Introducing: Batman and the Outsiders (Table of Contents: 5)

You’ve Met Batman and the Outsiders But You Still Don’t Know Their Awesome Origin! (Table of Contents: 7) (Expand) /