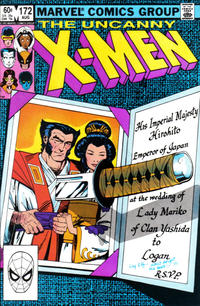 Scarlet in Glory (Table of Contents: 1)

First Line of Dialogue or Text
Tokyo... the upper class Meguro district...
Genre
superhero
Characters
X-Men [Cyclops; Storm; Wolverine [Logan]; Colossus; Rogue; Nightcrawler; Ariel [Kitty Pryde]]; Yukio; Mariko Yashida; Havok; Lockheed; Toni; Silver Samurai (villain); Viper (villain); Mastermind (villain)
Synopsis
The X-Men show up in Japan for Wolverine's wedding and Wolverine isn't happy to see newest member, Rogue. Wolverine and Nightcrawler help Yukio battle the Silver Samurai who is lurking about. Wolverine explains to Storm that Mariko's father was deeply involved in organized crime and he plans on cleaning up Clan Yashida. Viper sneaks in and poisons the X-Men. Mariko has a meeting with Silver Samurai who turns out to be her half-brother. Storm and Yukio rescue her from the Samurai and Viper. Hearing of the attack, Wolverine decides to go after the Samurai and Rogue asks to tag along.
Reprints
Keywords
Japan

Continued from Wolverine (Marvel, 1982 series) #4. In a "what is she talking about" moment, Rogue tells Wolverine that the poison wasn't as effective on her as she is "half-alien."