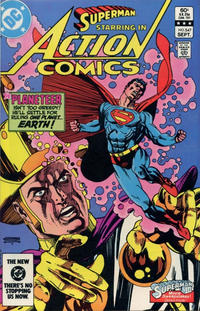 The Reincarnation of Alexander the Great! (Table of Contents: 1)

Job Number
S-5060
Genre
superhero
Characters
Superman [Clark Kent]; Lana Lang; The Planeteer (villain)
Synopsis
The parents of the Planeteer reveal his origin. Superman continues to rescue the world leaders the Planeteer captured. But the power being expelled by Superman's efforts is feeding into Planeteer. But ultimately, Superman stops him.
Reprints

Story continues from Superman (DC, 1939 series) #387 (September 1983). The splash page and first three panels of page 2 are added in order to split the story into two parts. Presumably, these additions were inked by Pablo Marcos, who is credited with "added inks." Page 15 is condensed from two of the original story pages, omitting two panels.