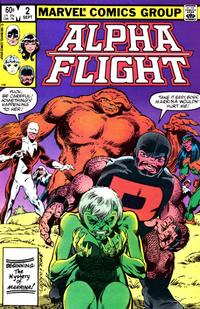 Shadows of the Past (Table of Contents: 1)

Vindicator changes his name to ‘Guardian.’ It’s the third alias of the character within five years, since his first appearance in X-Men #109, Feb. 1978, under the pseudonym ‘Weapon Alpha.' James Hudson was back in X-Men #120, April 1979, under the new alias of ‘Vindicator.’ At the end of Alpha Flight #1, in Alpha Waves John Byrne’s editorial, the subject of the evolution of the character’s aliases is evoked and suggests the third and last change to come. To note that on page 5 - panel 2 of this episode, Shaman draws from words used in Byrne’s editorial published in Alpha Flight #1 to express his feeling about how inappropriate ‘Vindicator’ is from now on.

First Line of Dialogue or Text
Jerry, no! You really can't be doing this to me!
Genre
superhero
Characters
James MacDonald Hudson (origin); Heather McNeil; Jerry Jaxon
Synopsis
Distraught with his technology being sold to the US Army, James decides to use the suit and take back the helmet, which was developed before joining Am-Can.
Reprints

Beginning a series of back-up stories on the origins of Alpha Flight.