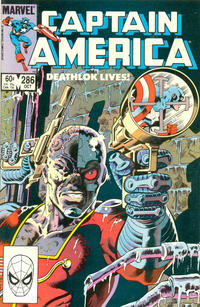 One Man In Search of...Himself! (Table of Contents: 2)

Genre
superhero
Characters
Captain America [Steve Rogers]; Deathlok [Luther Manning]; Luther Manning III Clone; Nomad [Jack Monroe]; Bernie Rosenthal; Godwulf; Brand Corporation (villain)
Synopsis
A clone of Luther Manning comes back in time from 1991 (this changes to 1993 in issue #288) to find the Deathlok cyborg. Steve is supposed to be spending the weekend at Bernie's house when they almost run down Manning. Captain America follows him into an abandoned Brand Corp. building where they come up against Brand soldiers and Deathlok himself.
Reprints

Two slight alterations in the Captain America: Deathlok Lives reprint are the removal of credits on page 4 and the replacement of the next blurb on page 22 with a thought from the Luther Manning clone from the first page of Captain America #287 which is also not reprinted.

Letters to the Living Legend (Table of Contents: 5)

Synopsis
Letters from (and replies to) Chris Harrison, Tom Long, Angie Cashdollar (Mike Zeck's aunt) and Ralph Griffith; also includes the question of the month, a special announcements section on Captain America Annual #7 and Captain America #287, and a small promo for Thor by Walt Simonson.