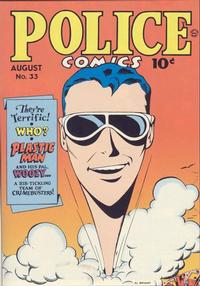 First Line of Dialogue or Text
One side for the navy, silly!
Genre
humor; military
Characters
Dewey Drip
Synopsis
While on leave, soldier Dewey is bullied by various sailors. He vows to kick "the next thing that passes me in a navy uniform." This happens to be a tough WAVE, who gives as good as she gets.

[The Murder That Wasn't] (Table of Contents: 3)

The Corpse of Mistaken Identity (Table of Contents: 5)

The Conqueror (Table of Contents: 6)

He Really Crashes the Party (Table of Contents: 7)

Writer credit revised from Paul Gustavson to ? by Craig Delich 2013-4-5. Jim Amash in the Quality Companion verifies that Gustavson wrote this feature through Police #22, then picked up again with #37. The intervening writer is unknown.

Paul's son, Terry, said that he never saw any of his Dad's work leave his Dad's studio that he had not penciled, inked and lettered. Letterer credit added by Craig Delich.

[Sphinx and Satin] (Table of Contents: 9)