Something Dire This Way Comes... (Table of Contents) 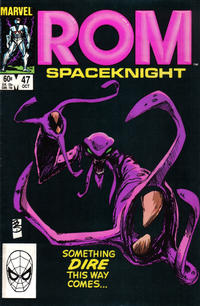 This issue introduces a new look for the Dire Wraiths, making them large orange monsters with long, barbed tongues with which they suck their victims dry. The change is explained thoroughly next issue. The new Wraith design was created by Walt Simonson.

A Golden Opportunity to Get Free MPC Kits Is Here. (Table of Contents: 14) (Expand) /