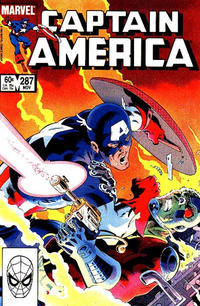 Bernie's sister's name changes from Jeannie to Nancy between this issue to next. Pages 1 and 15-17 are not reprinted in the Captain America: Deathlok Lives reprint.

Comic strip ad for the Solar Fox video game from CBS Electronics, appears between pages 3 and 4 of the story.

Items about how Jim Shooter was guest of honor at the 3rd Annual Salon del Comic y la Illustracion (Barcelona's huge international comics convention), many Marvel titles are published by Editorial Forum in Spain and Jim met their Editor in Chief Antonio Martin and has made Antonio and his crew honorary Bullpenners, Jim also attended Tulsa Con '83, hosted by the Tulsa Believers in Comics Fandom whose president is Larry Thomas (Tulsa is also the hometown of EPIC Illustrated Editorial Director Archie Goodwin) and Jim continues to be concerned about the closed door meetings about the upcoming Assistant Editors month when Bob DeNatale, Mike Higgins, Mike Carlin, Ann Nocenti, Bob Harras, Jim Owsley, Linda Grant and Eliot Brown take over for the regular editors who will be out of town. Appears between pages 21 and 22 of the story.

Letters to the Living Legend (Table of Contents: 6)

Characters
Watcher [Uatu]
Synopsis
Letters from (and replies to) Mike Kanterovich, Rod Fautenberry, Christopher Jefferson and Patrick Miano, also includes the question of the month, a special announcements section on who sent in answers to the question of how the Official Handbook of the Marvel Universe character data could be used in role-playing games and hype for the next issue, and a small promo for The Official Handbook of the Marvel Universe using an illustration of the Watcher.